Charles VII (22 February 1403 – 22 July 1461), called the Victorious (French: le Victorieux) or the Well-Served (French: le Bien-Servi), was a monarch of the House of Valois who ruled as King of France from 1422 to his death. In the midst of the Hundred Years' War, Charles VII inherited the throne of France under desperate circumstances. Forces of the Kingdom of England and the Duchy of Burgundy occupied Guyenne and northern France, including Paris, the most populous city, and Reims, the city in which the French kings were traditionally crowned. In addition, his father Charles VI the Mad had disinherited him in 1420 and recognized Henry V of England and his heirs as the legitimate successors of the French crown instead. At the same time, a civil war raged in France between the Armagnacs (supporters of the House of Valois) and the Burgundian party (supporters of the House of Valois-Burgundy allied to the English). With his court removed to Bourges, south of the Loire River, Charles was disparagingly called the “King of Bourges”, because the area around this city was one of the few remaining regions left to him. However, his political and military position improved dramatically with the emergence of Joan of Arc as a spiritual leader in France. Joan of Arc and other charismatic figures led French troops to lift the siege of Orleans, as well as other strategic cities on the Loire river, and to crush the English at the battle of Patay. With the local English troops dispersed, the people of Reims switched allegiance and opened their gates, which enabled the coronation of Charles VII in 1429 at Reims Cathedral. This long-awaited event boosted French morale as hostilities with England resumed. Following the battle of Castillon in 1453, the French had expelled the English from all their continental possessions except for the Pale of Calais. The last years of Charles VII were marked by conflicts with his turbulent son, the future Louis XI of France. 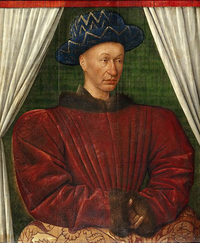