Carol Creighton Burnett (born April 26, 1933) is an American actress, comedian, singer, and writer. She is best known for her long-running TV variety show, The Carol Burnett Show, for CBS. She has achieved success on stage, television, and film in varying genres including dramatic and comedy roles. She was also back on Broadway in 1995 in Moon Over Buffalo, for which she was nominated for a Tony Award. 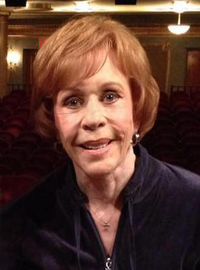 image credit
Carol Burnett by Dennis115, is licensed under cc-by-3.0, resized from the original.