Carly Rae Jepsen (born November 21, 1985) is a Canadian singer-songwriter from Mission, British Columbia. In 2007, she placed third in Canadian Idol season five's competition and was a part of the Canadian Idol Top 3 concert tour. Shortly after competing on Canadian Idol, she independently released her debut album, Tug of War, through MapleMusic Recordings on September 30, 2008. She was also named by Billboard as 2012's Rising Star and introduced in Canada's Walk of Fame'sSlaight Allan Awards. 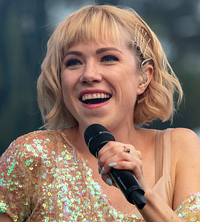 image credit
Carly Rae Jepsen by Tabercil, is licensed under cc-by-sa-3.0, resized from the original.