Brad Douglas Paisley (born October 28, 1972) is an American singer-songwriter and musician. His songs are frequently laced with humor and pop culture references.Paisley was the 2008 CMA and ACM Male Vocalist of the Year winner. Starting with the release of his 1999 album Who Needs Pictures, Paisley has recorded nine studio albums and a Christmas compilation on the Arista Nashville label, with all of his albums certified gold or higher by the RIAA. In addition, as of 2013 he has scored 32 Top 10 singles on the U.S. Billboard Hot Country Songs chart, 18 of which have reached No. 1 and used to hold the record 10 consecutive singles reaching the top spot on the chart, until the streak with broken by Blake Shelton in 2014. On November 10, 2010, Paisley won the Entertainer of the Year award at the 44th annual CMA Awards. 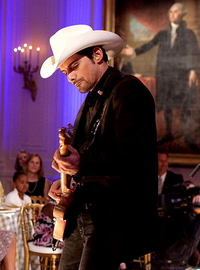