William Melvin "Bill" Hicks (December 16, 1961 – February 26, 1994) was an American stand-up comedian, social critic, satirist and musician. His material, encompassing a wide range of social issues including religion, politics, and philosophy, was controversial, and often steeped in dark comedy. He criticized consumerism, superficiality, mediocrity, and banality within the media and popular culture, which he characterized as oppressive tools of the ruling class that "keep people stupid and apathetic". In 2007 he was voted the fourth greatest stand-up comic on Channel 4's list of the UK's 100 Greatest Stand-Ups, and he maintained that ranking on the 2010 list. 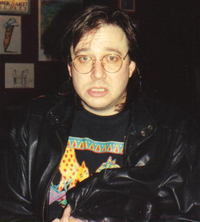 image credit
Bill Hicks by Bill_Hicks_at_the_Laff_Stop_in_Austin,_Texas,_1991_(2).jpg, is licensed under cc-by-2.0, resized from the original.