Ben Schwartz (born September 15, 1981) is an American actor, comedian, and writer. He is perhaps best known for portraying a fictional version of himself on the comedy web series Jake and Amir and for portraying Tom Haverford's friend Jean-Ralphio Saperstein on the sitcom Parks and Recreation. In 2012, he joined Showtime's television comedy House of Lies as the ambitious, brash, and insecure management consultant Clyde Oberholt.His feature film credits include Peep World with Rainn Wilson, Michael C. Hall and Sarah Silverman as well as Everybody's Fine with Robert De Niro. Additionally he had a role in The Other Guys starring Will Ferrell and Mark Wahlberg and directed by Adam McKay. 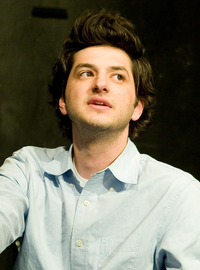 image credit
Ben Schwartz by Jared eberhardt, is licensed under cc-by-sa-2.0, resized from the original.