Amy Lee Grant (born November 25, 1960) is an American singer-songwriter, musician, author, media personality and actress, best known for performing Christian music. She has been referred to as "The Queen of Christian Pop". As of 2009, Grant remains the best-selling contemporary Christian music singer ever,[citation needed] having sold over 30 million units worldwide. She was honored with a star on Hollywood Walk of Fame in 2005 for her contributions to the entertainment industry. 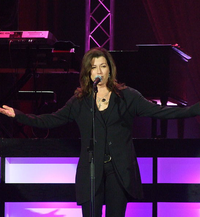 image credit
Amy Grant by Scott Catron, is licensed under cc-by-sa-2.0, resized from the original.