Amerie Mi Marie Rogers (born January 12, 1980), known professionally as Amerie or Ameriie, is an American recording artist, record producer, and actress. She debuted in 2002 with the album All I Have, primarily co-written and produced by Rich Harrison, and was well received in the urban market. In 2005, Amerie released her biggest hit to date, "1 Thing", the lead single from her second album, Touch, which garnered her crossover recognition and earned two Grammy Award nominations. Her third album, Because I Love It, achieved moderate international success in 2007, although it was not released in North America, and she subsequently left her label Columbia Records. Amerie released her fourth studio album, In Love & War, in 2009, her first album under Island Def Jam. 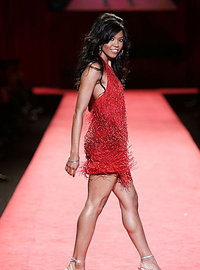 image credit
Amerie by The Heart Truth, is licensed under cc-by-sa-2.0, resized from the original.