Amanda Lepore (born December 5, 1967) is an American model, socialite, singer and performance artist. She is one of the most prominent transgender public figures. She has appeared in advertising for numerous companies, including M.A.C. Cosmetics, Mego Jeans, The Blonds, Swatch, CAMP Cosmetics, and Heatherette, which has used her likeness on clothing as well as hiring her as a model. Lepore is also noted as a regular subject in photographer David LaChapelle's work, serving as his muse, as well as many other photographers, such as Terry Richardson. She participated in LaChapelle's Artists and Prostitutes 1985–2005 exhibit in New York, where she "lived" in a voyeuristic life-sized set. Lepore has also released several singles, many written by and/or recorded with Cazwell. In 2011 she released her debut studio album I...Amanda Lepore on Peace Bisquit. 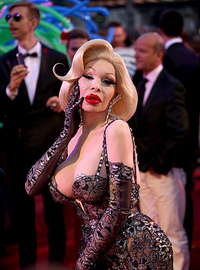 image credit
Amanda Lepore by Tsui, is licensed under cc-by-sa-3.0, resized from the original.