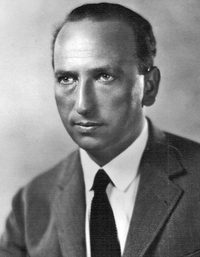 Michael Curtiz (born Mihaly Kertesz, December 24, 1888 – April 10, 1962) was a Hungarian and American film director, recognized as one of the most prolific directors in history. He directed classic films from the silent era and numerous others during Hollywood's Golden Age, when the studio system was prevalent. Curtiz was already a well-known director in Europe when Warner Brothers invited him to Hollywood in 1926, when he was 38 years of age. He had already directed 64 films in Europe, and soon helped Warner Brothers become the fastest-growing movie studio. He directed 102 films during his Hollywood career, mostly at Warner Brothers, where he directed 10 different actors to Oscar nominations. James Cagney and Joan Crawford won their only Academy Awards under Curtiz's direction. He put Doris Day and John Garfield on screen for the first time, and he made stars of Errol Flynn, Olivia de Haviland, and Bette Davis. He himself was nominated five times and won twice, once as Best Director for Casablanca. He introduced to Hollywood a unique visual style using artistic lighting, extensive and fluid camera movement, high crane shots, and unusual camera angles. He was versatile in that he could handle any kind of picture: melodrama, comedy, love story, film noir, musical, war story, Western, or historical epic. But he always paid attention to the human interest aspect of every story, stating that the "human and fundamental problems of real people" were the basis of all good drama. Curtiz helped popularize the classic swashbuckler with films such as Captain Blood (1935) and The Adventures of Robin Hood (1938). He directed many dramas which today are also considered classics, Angels with Dirty Faces (1938), The Sea Wolf (1941), Casablanca (1942), and Mildred Pierce (1945). He directed leading musicals, including Yankee Doodle Dandy (1942), This Is the Army (1943) and White Christmas, and he made comedies with Life With Father (1947) and We're No Angels (1955).
birthtime credit:
Scholfield / Accuracy: excellent