Joseph William "Joe" Calzaghe, CBE (/kælˈzæɡi/ kal-ZAG-ee; born 23 March 1972) is a Welsh former professional boxer who competed from 1993 to 2008. He held the WBA (Super), WBC, IBF, WBO, Ring magazine and lineal super-middleweight titles, as well as the Ring light-heavyweight title. Calzaghe is the longest-reigning super-middleweight world champion in history, having held the WBO title for over 10 years and making 21 successful defences before relinquishing the title to move up to light-heavyweight. As his super-middleweight and light-heavyweight reigns overlapped, he retired with the longest continual time as world champion of any active fighter. Between 2006 and 2008, Calzaghe was rated by The Ring as one of the world's top ten boxers, pound for pound, reaching a peak ranking of third in January 2009. He retired in February 2009 with an undefeated record, and as a reigning world champion. Calzaghe is sometimes referred to as the "Pride of Wales" or the "Italian Dragon", the latter being a play on the moniker "Italian Stallion" and a reference to his multiple heritages (the dragon being both a prominent Welsh emblem that appears on the Welsh flag and a figure in Sardinian myth). In 2007, Calzaghe became BBC Sports Personality of the Year, by gaining 28.19% of the public vote. This made Calzaghe the first Welsh winner of this award since show jumper David Broome in 1960. He was awarded the Young Boxer of the Year Award in 1995. Calzaghe was inducted into the International Boxing Hall of Fame in 2014. 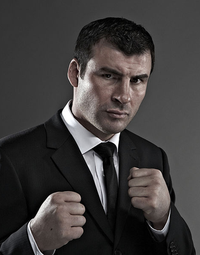 image credit
Joe Calzaghe by Ben Duffy, is licensed under cc-by-3.0, resized from the original.