Faye Elaine Marsay (born 30 December 1986) is an English actress. Her notable roles include Anne Neville in The White Queen, Amy in Need for Speed, the recurring character Candice in Fresh Meat, Steph in the film Pride, Blue Colson in the Black Mirror episode "Hated in the Nation", and the Waif in the fifth and sixth seasons of Game of Thrones. 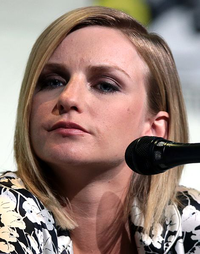 image credit
Faye Marsay by Gage Skidmore, is licensed under cc-by-sa-3.0, resized from the original.