Eydie Gormé (also spelled Gorme; August 16, 1928 – August 10, 2013) was an American singer who performed solo as well as with her husband, Steve Lawrence, in popular ballads and swing. She earned numerous awards, including a Grammy and an Emmy. She retired in 2009 and is survived by Lawrence, who continues to perform as a solo act. 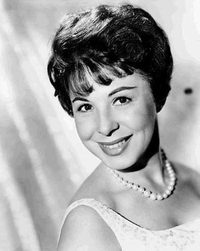