Steven Paul "Elliott" Smith (August 6, 1969 – October 21, 2003) was an American singer-songwriter and musician. Smith was born in Omaha, Nebraska, raised primarily in Texas, and lived for much of his life in Portland, Oregon, the area in which he first gained popularity. Smith's primary instrument was the guitar, but he was also proficient with piano, clarinet, bass guitar, drums and harmonica. At the time of his death, Smith was working on his sixth studio album, From a Basement on the Hill, which was posthumously completed and released. 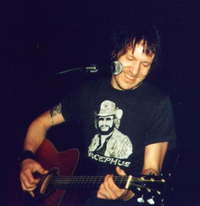 image credit
Elliott Smith by llaurens, is licensed under cc-by-sa-3.0, resized from the original.