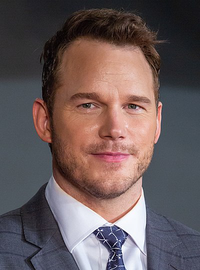 image credit
Chris Pratt by Dick Thomas Johnson, is licensed under cc-by-2.0, resized from the original.
Christopher Michael "Chris" Pratt (born June 21, 1979) is an American actor. He is known for his television roles, playing Andy Dwyer in Parks and Recreation and Harold Brighton "Bright" Abbott in Everwood, as well as for supporting performances in acclaimed films such as Moneyball, Zero Dark Thirty, and Her. He also provided the voice of Emmet Brickowski in the 2014 computer animated film The Lego Movie and is set to appear as Peter Quill / Star-Lord in the upcoming Marvel Studios superhero film Guardians of the Galaxy in August 2014.
birthtime credit:
Viktor / Accuracy: excellent